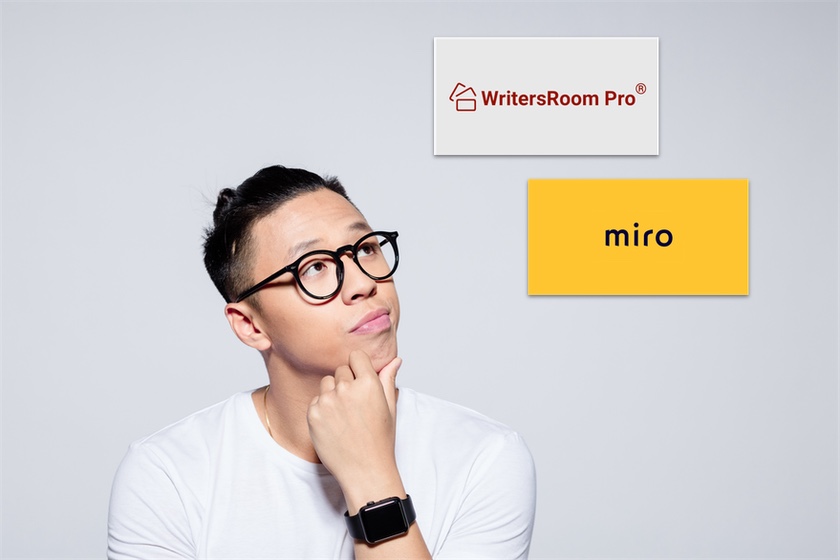 After COVID-19 closed down professional TV and film writers’ rooms there was a mad scramble to find an app that could keep the television industry’s showrunners, writers, support staff, and producers working remotely.   While many rooms began to rely on Google Docs and Google Sheets for convenience, it became increasingly clear that these were not up to the challenge of the professional writers’ room.  Additionally, in our increasingly security-aware creative environment in which studios and companies are facing literally dozens of attempted hacks a day, trusting some of the most prized IP in the world to solutions from Google and others started to be seen like a bad idea.  Over the past 6 months, two web-based applications have emerged as the go-to apps for writers’ rooms: Miro and WritersRoom Pro.

Miro is a fantastically well-designed app.  As a general purpose whiteboard app, Miro is slick, looks good, works smoothly, and does many things well.  WritersRoom Pro is also a fantastically well-designed app developed by a TV writer and showrunner that is slick, looks good, works smoothly and does one thing well by design: copies the look and feel of traditional corkboards and index cards used in professional writers’ rooms.   And while Miro can approximate the same look of the boards in the writers’ room, doing so is a process that is time-consuming, inefficient, complex, unintuitive, and extremely unsatisfying.   I’m not blaming Miro for not being better for writers at what it does anymore than I would blame a hammer for not being a screwdriver.

I know I’m biased towards WritersRoom Pro, but that doesn’t make my conclusion that WritersRoom Pro is a better solution untrue.  Looking at a direct comparison of the most important features to writers and writers’ rooms makes it easy to pick a winner in each category.  Let’s start with setting up a new project:

SETTING UP A NEW PROJECT

MIRO – To make the comparison fair I asked a current showrunner’s assistant who actively uses Miro to set up a blank project comprised of a season board, episodes boards, and a character board for a 10 episode first season show using the numbering convention of 101, 102, 103, etc.  The episode structure would be a teaser, five acts, and a tag.  I also made things easier for him by showing him what those boards would look like in WritersRoom Pro so he had a visual guide to copy.  After almost exactly 8 minutes this is what he built what you see to the right.

WRITERSROOM PRO – Because it was designed strictly for TV and longform story development, WritersRoom Pro has a dedicated project setup window that allows you to quickly enter the name of your project, what season you’re on, the number of episodes, the format, which of the four typical boards you’d like to use, your episodic/story structure, and how you like to number your episodes.

Entering this information and creating this project took WritersRoom Pro exactly 17 seconds, after which we had the following 3 boards fully configured:

The difference in these set-ups goes beyond just the difference in time both took.  The Miro setup created 12 disconnected boards with none related in any way to another.  WritersRoom Pro knows that episodes relate to each other as well as the season board and character board, and allows for easy and logical navigation between episodes and boards.  Additionally, WritersRoom Pro has unlimited ‘Scrap’ boards; blank boards for ideas, locations, stories, etc; anything that doesn’t have a home on one of the other boards.  (Note: Unlimited Scrap boards is a feature in the professional editions of WritersRoom Pro.  The Individual and Partner editions are limited to a single Scrap board.)