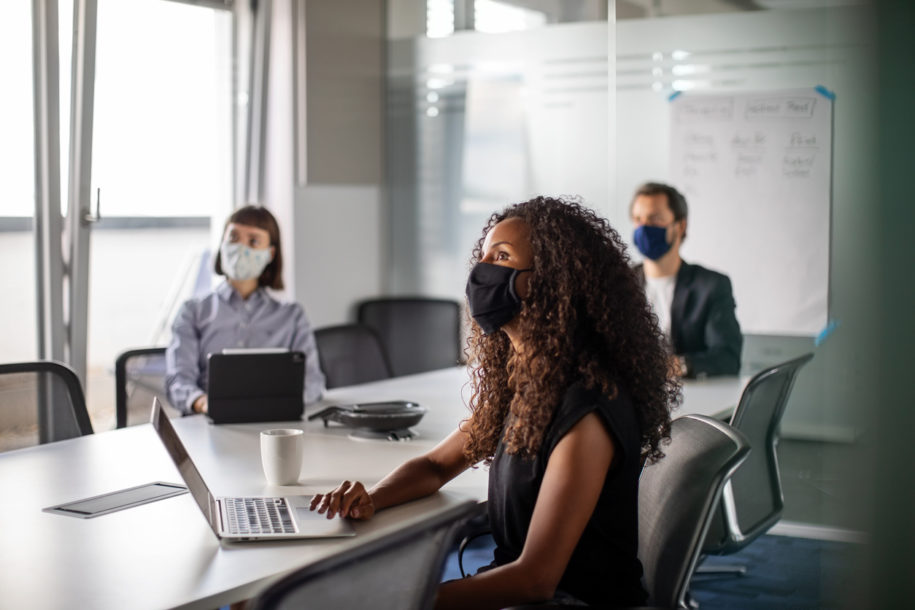 Well…it was fun while it lasted.

Los Angeles just announced that the indoor mask mandate is back, and it will become mandatory for everyone, regardless of vaccination status, to wear masks indoors.   And even though the vast majority of writers’ rooms are either fully-remote or a hybrid of in-person and remote, the new mask mandate certainly puts a kink in the plans some rooms have (had?) to reopen in person.

It’s not just the difficulty of being in a room and having to wear that figgin’ mask all day, it’s all of the safety protocols in production that will either be reimplemented or delayed in being relaxed.  Things like physical distancing (very hard to accomplish around a conference table with your staff) will still be the norm on set and in meetings, and even things like passing index cards and pens or Sharpies around will be forbidden.  Or at least, discouraged with extreme prejudice.  A friend of mine is in production on his series and he was caught going into his writers’ room without a mask.  Studio security stopped him and gave him a warning: they catch him doing it again and they’ll shut down his show.  I’m not making this up.

As I’m not living with the complexities of physical production I can’t attest to the challenges crews are facing, but knowing crews the way I do I’m sure they’re coping with it all with the same good cheer film and television crews are known for.  For writers, the Los Angeles mask mandate will likely mean the near-term delay of having in-person rooms come back.

The good news, such as it is, is that WritersRoom Pro will keep writers’ hard at work from wherever they find themselves working, just as we’ve done since before COVID was a thing.  To be clear, WritersRoom Pro was never designed to be a COVID solution in spite of the misconception some of our clients have.  WritersRoom Pro was released in the fall of 2019 and was built to be the logical and inevitable evolution of the writers’ room process from analog to digital in exactly the same way that screenwriting ditched the typewriters, cameras ditched the film labs, and editing ditched the Moviolas, steenbecks, and trim bins.  We’re what’s next, only we happen to be here now.

So…here’s hoping the mask mandate slips into our review mirror sooner rather than later.  But regardless, we’ll help keep the lights on in the writers’ rooms.